Projects:Heated rock for my chinchilla

From happytrees.org
Jump to: navigation, search

Warning: Chinchillas can easily overheat, so I only use it when my place is cold. 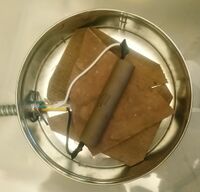 I keep my house on the cold side and my chinchilla is getting old and I felt bad for him. He usually sleeps on top of me while I'm sleeping, but while I'm away .....

So I built him a heated rock so he can hangout in a toasty place. It is the simplest circuit I have ever built, and pretty simple project in general.

I made it using a metal tin, grout/cement, flag stone fragments for the main pad/rock. Electrically it consists of a single 3kΩ (20W) power resistor I had lying around, and is attached directly to 120V AC house power. You only need a 5W or greater. I used a armored electrical wire externally so my chinchilla couldn't chew threw it. I attach ground to the metal tin, because when cement is wet the resistance goes down allot and could be a danger.

First I put some plastic filler in the tin, then a rock, then the resistor on top of that. Then i filled it with grout(You can use cement or what ever, I just had some left over.) Last I placed the flag stones on top to make it pretty.

I should have put a sheet of aluminum on top of the resistor, under the flag stone, to spread the heat better. Just lying on top, not electrically connected. Without it, the heat spreads OK, but is defiantly warmer spot in the middle.